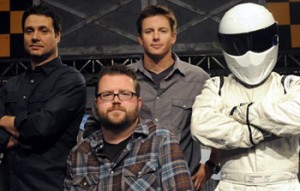 This week’s episode of Top Gear reflected a very good response to a lot of the criticisms that I had expressed about the show’s history thus far. I am sure that was not the reason for the change but I found this week’s show to be a very welcome departure from the traditional format.

The “Beat Tanner” segment was spot on for what the show needed. The viewers of Top Gear US need to believe that the presenters know what they are doing. Tanner is the easiest one of the three to assume that role and the challenges did a reasonable job of doing that. The LFA test was interesting. It harkens back to the test that Jeremy Clarkson did with an Acura NSX in Laguna Seca years ago. It was impressive to see the driver win this time. That LFA is the North American press car. It made the rounds through Atlanta a few months ago. I am not sold on the car but I am impressed by the engineering behind it.

The ZR1/R8/Fiesta record attempt was a bit drawn out. The obvious main ingredient to break the record was a large enough building. That segment was an interesting tidbit but it could have been cut down a lot. It should also come as no surprise that the 500 hp purpose built race car wiped the track with the regular road cars. I do enjoy the UK segments that illustrate how fast race cars are so this was cool to see.

The SIARPC segment was uninspiring as usual. The third most compelling Girl Next Door didn’t seem to have much of a reason to be there. She wasn’t promoting anything interesting and her being there stank of a desperate attempt to attract someone that the audience might recognize.

The show definitely has potential. It may take it a few seasons to catch its stride but I believe it can get there. I think that the show needs one more credible automotive personality. Rutledge is close but to me it doesn’t completely work. Tanner can’t provide the color and the skill so some tweaks need to be made but it is awesome to see some improvement.