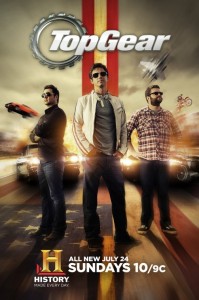 This week’s episode of Top Gear US centered around a fairly blatant imitation of the UK Version’s cheap car challenges. Each of the presenters was told to buy a car for $500 and then they competed in a series of challenges. The tests included the immensely practical competition of who could push their car the fastest, whose car had the most foreign fluids inside of it, and a “race” up the PCH.

The problem with the show is simply a lack of content. Obviously there are just a few shows, save LOST, who can compete with the UK Versions budget but the material in an episode of TopGear US can barely fill a trailer.

There are really only two segments per show. This week was the $500 car challenge and the test of the CTS-V range. With neither of those segments being interesting, the show falls pretty flat. Adam from Maroon 5 performed poorly on the SIARPC segment and the viewer didn’t leave with anything to glean from the hour of wasted life.

The presenters need to do something to develop a rapport with the viewer. The guys in England didn’t start out with jokes, they started out with cars. The shows were content rich and demonstrated that these guys knew what they were talking about. Until the US crew can develop that, the show is best viewed on Mute or not at all.