The Sesto Elemento Prepares for Production 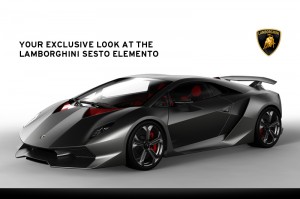 Lamborghini announced recently that they are going to make an extremely limited run of the Sesto Elemento concept car shown last year at the 2010 Paris Motor Show. The production version is rumored to be nearly identical to the concept shown. It will still have the LP570-4 powertrain and the full carbon fiber construction.

The price has not been announced but a responsible guess is close to $2 million. The car will not be road legal anywhere but there is probably not a cooler track toy anywhere. And who knows, maybe one day the license plate from your road legal Superleggera might find its way onto the rear clip of your Sesto Elemento for a quick run up into the mountains.