Lamborghini has announced that they are releasing a new Super Sports Car at the Frankfurt Motorshow on September 13, 2011. 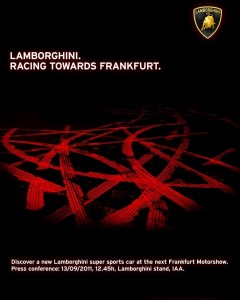 The leading speculation at this point is a road going version of the Lamborghini SuperTrofeo Gallardo Race Car. It would sort of be a Super-Superleggera. Very lightweight, more horsepower, limited production. Sounds like fun. What do you think?

The alternate theory is a 250 MPH Aventador employing Veyron technology. Not a bad idea but probably not in the cards quite yet.

Newsletter Signup
In this article:Concept, Frankfurt Motorshow, Lamborghini
Up Next: